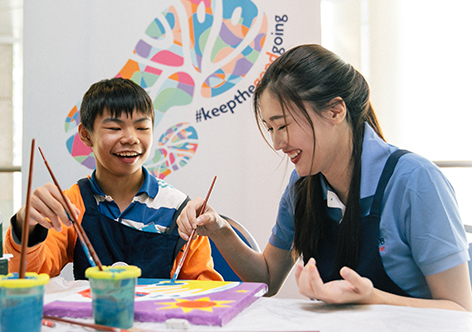 Bank marks 40th UOB POY Anniversary with a range of commemorative initiatives, including the launch of the UOB Digital Art Grant and a new iconic awards trophy

Malaysian artist Mr Saiful Razman has won the 2021 UOB Southeast Asian Painting of the Year (POY) award for his artwork titled Walk in Silence, Don’t Walk Away in Silence. Mr Razman’s artwork was chosen from among the country winners of the 2021 UOB POY competitions held in Indonesia, Malaysia, Singapore and Thailand. His winning piece was selected from among a record high number of entries the competition has received in its 40-year history. 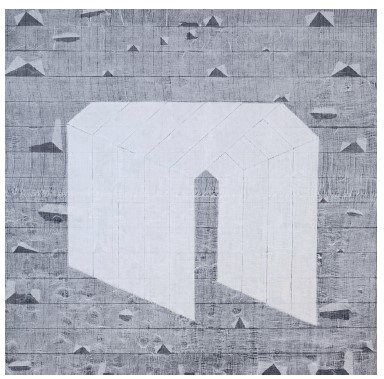 Walk in Silence, Don’t Walk Away in Silence was inspired by the quietness and serenity of self-isolation during the COVID-19 pandemic. At the centre of the minimalistic and monochromatic artwork features a haven in the shape of a house that is pure and peaceful, while the surrounding dimensional landscape patterns symbolise mountains. The creative use of thin-rolled tissue paper and medical gauze on the artwork creates the delicate texture that reflects the current pandemic situation, captivating the panel of judges from the four Southeast Asian countries.

On winning the 2021 UOB Southeast Asian Painting of the Year award, Mr Razman said, “The COVID-19 pandemic has had a major impact on many people around the world and has also led to feelings of isolation becoming more prevalent than ever. Through Walk in Silence, Don’t Walk Away in Silence, I wanted to express the absence of sound and the sense of serenity experienced during self-isolation through using mixed media and highly contrasting shades of grey. I am honoured to win the 2021 UOB Southeast Asian Painting of the Year award and to represent Malaysia at one of the most recognised art competitions in this region.” 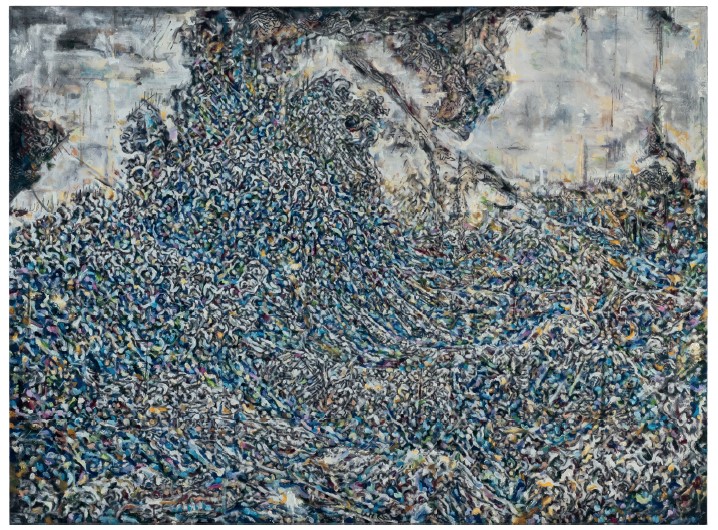 A Dramatic Cinematic for Our Century, Mr Keane Tan, 2021 UOB Painting of the Year (Singapore)

Mr Keane Tan, 22, was presented the 2021 UOB POY (Singapore) award for his painting titled A Dramatic Cinematic for Our Century. The three-time award recipient1 of the competition illustrated a scene of Singapore’s iconic Merlion Park, with crashing blue waves in a highly-graphic and dramatised style. Mr Tan took inspiration from Hokusai’s The Great Wave off Kanagawa and the Merlion Park statue to tell the story of a Southeast Asia city. He draws the comparison of the flood to a purge of the society’s excesses, with a time for reset that is eminent. The magnificent artwork uses image generation and machine learning technologies to create the base, followed by detailed finishing in oil paint.

Mr Tan graduated from the Nanyang Academy of Fine Arts, Singapore and his art practice focuses on metamodernist art, post-pandemic philosophy and macro aesthetics. His success in winning the top UOB POY (Singapore) – Established Artist Category award this year demonstrates the story of how UOB has nurtured his journey in art where he first won a Bronze award in the Emerging Artist Category four years ago. 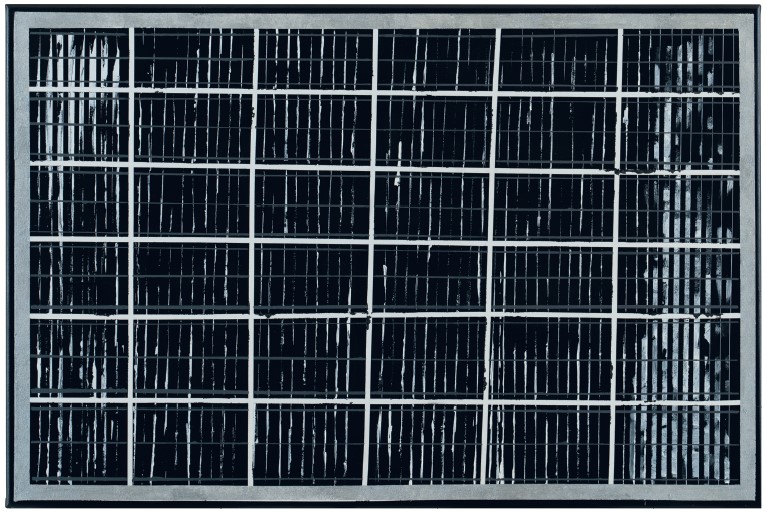 Mr Brian Ko, 20, won the 2021 UOB Most Promising Artist of the Year Award (Singapore) in the Emerging Artist Category for his painting titled Uncertainty of Photovoltaic Cells. His abstract representation of a black solar panel in disrepair symbolises mankind’s renewed efforts on and commitment towards driving sustainability, while reflecting the uncertainty that lies ahead. The misalignment of the shapes and lines embodies human fallibility in mankind’s efforts to create a sustainable future where there is no simple or perfect solution to the existential threat of climate change. Mr Ko graduated from the School of the Arts, Singapore.

The 2021 UOB POY Virtual Awards Ceremony was broadcasted today on UOB YouTube. The winning paintings from across the region (see Appendix) will be exhibited at the UOB Art Gallery, UOB Plaza 1 in Singapore from 27 November 2021 to 28 February 2022 as well as virtually on www.UOBandArt.com.

As part of this year’s anniversary programme, all country winners will attend a one-month residency programme at either the Fukuoka Asian Art Museum in Japan or the UOB Art Gallery in Shanghai, China. Through the programme, these artists will have the opportunity to immerse themselves in the art culture of the host country and to learn about various approaches to art creation.

This year marks the 40th anniversary of the UOB POY, the Bank’s flagship regional visual arts programme. The UOB POY is the longest-running art competition in Singapore and has helped more than 1,000 artists across the region share their works on a larger stage. Many have gone on to define Southeast Asian art including Mr Goh Beng Kwan, the late Mr Anthony Poon and Mr Chua Ek Kay, who were also recipients of the Singapore Cultural Medallion, Singapore’s most distinguished art award. The country winner of the 2010 UOB POY (Thailand), Ms Pannaphan Yodmanee, has also gone on to win the distinguished Benesse Prize2, the official award of the Singapore Biennale, in 2016.

Mr Wee Ee Cheong, Deputy Chairman and Chief Executive Officer, UOB, said that the vital role of art in connecting communities has shone through from the very first year of the competition.

“We appreciate the special role artists play in society as they help to challenge, to inspire and to connect us all. Over the last four decades, the UOB Painting of the Year competition has helped to uncover and nurture our region’s artists, making their artworks accessible to a wider audience. This year we have seen a record number of entries from across the region, each entry testament to the imagination and ingenuity of Southeast Asian artists to relate to their audiences. Our artists have once again pushed the boundaries of creativity by capturing the fortitude, compassion and resilience of people as they look beyond immediate concerns and find rays of hope for a better future.”

To commemorate the UOB POY 40-year milestone, the Bank has introduced a new award trophy modelled after Vitalità, a bronze sculpture commissioned by UOB and created by foremost Italian sculptor, Ms Anna Chiara Spellini. Embodying the vital energy in the visceral line of this sculpture, Vitalità has been endowed with the vigour of being ready to move upward and forward. The new iconic UOB POY award trophy aims to illuminate the passion of artists, inspiring their imagination and ingenuity as they express their artistic vision.

Next year, UOB will also host a special commemorative exhibition to feature past winning artworks from UOB Southeast Asian POY winners and UOB POY (Singapore) winners since 1982. The exhibition will be open to the public and attendees will experience how Southeast Asian art has changed over the years and at the hands of the competition’s art luminaries. The commemorative exhibition will also hold virtual tours on www.UOBandArt.com.

Mrs Rosa Daniel, Chief Executive Officer, NAC and Ex-Officio, the stART Fund Committee, said, “NAC deeply appreciates UOB’s generous donation as a Major Donor to the Sustain the Arts Fund with the launch of the UOB Digital Art Grant to support emerging digital artists and organisations in Singapore in sustaining and growing their practice. This gift will build greater awareness and appreciation of the digital art form among audiences through digital tools for creative expressions.”

2 The Benesse Prize was established in 1995 by Benesse Corporation and it was first awarded at the Venice Biennale in the same year. It was created to recognise the artistic endeavours of outstanding artists and support those who embody the corporate philosophy of the Benesse Group, which is “Well-Being.” Since 2016, the Benesse Prize has been the official award of the Singapore Biennale, presented in collaboration with the Singapore Art Museum.

3 Refer to https://www.nac.gov.sg/support/giving-to-the-arts/start-fund for more information.

About UOB
UOB is a leading bank in Asia with a global network of around 500 offices in 19 countries and territories in Asia Pacific, Europe and North America. Since its incorporation in 1935, UOB has grown organically and through a series of strategic acquisitions. UOB is rated among the world’s top banks: Aa1 by Moody’s Investors Service and AA- by both S&P Global Ratings and Fitch Ratings. In Asia, UOB operates through its head office in Singapore and banking subsidiaries in China, Indonesia, Malaysia, Thailand and Vietnam, as well as branches and representative offices across the region.